If you’ve followed this blog at all you know I once was a die-hard fundamentalist, creationist, evangelistic, conservative, inerrant “Word of God” girl.  When I began to explore and question that stance I learned very quickly that there are those who believe anything less than that and you aren’t a Christian.  It’s sad, really.

I was told when I got “saved” that the only thing I had to believe was that Jesus did for my sins.  Later I found out that I had to believe that Jesus was not only the Son of God, but that he was God.  Then I was told I had to believe the Resurrection, then the Virgin Birth, then the Trinity, then the literal account of Creation.  Little by little I was sucked in to the fundamentalist mind-set.  Sucked in may not be accurate.  I went willingly.  Until I was at the point of all the other fundamentalists.  Anyone who dared disagree with even one point of the Holy Book wasn’t a good Christian.  Would I ever have said that out loud…that if you didn’t believe the same things I believed you might need to check your ticket to the afterlife….nah.  That would be rude.

Recently Like a Child posted about the slippery slope in the science vs. Christianity debate.  The problem is not the fact that there is a debate.  I like a good debate.  It’s healthy and you can learn a lot.  No, see, the problem is what happens when healthy debate turns into “my God can beat your God” and “I know you are, but what am I?”.  Like a Child referenced a recent article in the NYT and a subsequent article at BioLogos.

Using another’s viewpoint about homosexuality, creationism, the immaculate conception, or a myriad of other points as a barometer of their Christianity is kind of anti-Christian.  I don’t have to be a fundamentalist to call on the supposed words of Christ.  Whether he said them or not they are pretty good words to live by.  “By this all men will know that you are my disciples, if you love one another.” (John 13.35)

When the discussion breaks down to the point that you’re questioning another’s faith because their beliefs don’t measure up to your standards you are treading on dangerous ground.  I grew weary of the ying-yanging.  Not the debating between theists and non-theists, but the discussions that quickly deteriorate into name calling and questioning the faith of those within Christianity.   Yes, Paul did say to test the spirits. Dear friends, do not believe every spirit, but test the spirits to see whether they are from God, because many false prophets have gone out into the world.(1 John 4:1)  Once. One.time. How many times does the Bible say to “love one another”?  I lost count. You don’t have to accept beliefs you oppose.  But you do need to accept the people who believe them.

I know that recently I haven’t blogged much.  When I have blogged it’s either been about my personal stuff or it’s been pretty snarky.  By nature I’m not really even a snarky person.  That got old for me pretty quickly.  I’d like to have reasonable, calm, respectful discussion about the issues at hand, whatever they might be.

I’m still pretty unsure what I believe about God or whether there even is one.  Surely even if there is not a personhood of God 1 John 4:8 is true.  Whoever does not love does not have God because God is love.  And finally 1 Corinthians 13:1 speaks volumes for how people should be treating one another. If I speak in the tongues of men and of angels, but have not love, I am only a resounding gong or a clanging cymbal.

Sometimes words we speak come back to haunt us.  For instance, today my boss told me that a fuel rep that she’d been pretty close to had committed suicide.  She’d found out he’d passed away in September, but she’d only just found out what the cause of death was.  He was divorced but planning to be remarried in November and he left behind two teenage daughters.  I’d never met the man but still felt a little sad at the loss…the loss his fiance and daughters must feel.

There was another party to the conversation however.  Overhearing that Mike had committed suicide he said with condescension dripping from his lips, “It takes somebody really sick to do that; taking the easy way out.”  Confession time: I’ve said such a thing. I’ve thought such a thing.  I’ve made the joke that if I died and it was ruled suicide that someone should investigate because there’s no way I’d kill myself, there’s no way I’d hurt myself.

Having lived a little longer, though, and having been through some things I find a bit more compassion for the failures that cause a person to “do that”.  Saying that it “takes somebody really sick to do that” really is stating the obvious, isn’t it?  After all someone would truly have to be in a bad way to take their own life.  Have I ever thought about suicide?  Only fleetingly…until I reminded myself it was a crazy thought.  Have I thought I and those around me might be better off if I were dead?  Most assuredly.  I’ve sat in my bathtub and lay awake at night in my bed wishing I were.  I’ve cried out to God to just take me already. Thankfully I’m not in that place anymore.  But having gone to that place I can say with relative assurance that I was sick.  I wouldn’t call what I was suicidal.  I was too chicken to be.  I was too afraid I’d botch the job.  And with the help of some good friends and a fantastic fiance I was able to see a better life ahead.

The easy way out? No. I don’t buy it. I think someone who takes their own life just doesn’t see a better alternative. And it’s a sad state of affairs when a person feels their best alternative is to just not be.  I’m sorry that anyone out there doesn’t realize there are those around them that aren’t “better off” without them.  In fact they’re infinitely worse off.  Some people view suicide as a selfish act.  Is it?  Maybe in the mind of the suicidal it’s the ultimate sacrifice.  Or maybe they’re in so much pain they can’t think of another way to ease it.

I don’t think there are many people who haven’t been touched in some way by this “sickness”.  Maybe it was a former schoolmate, a family member, an acquaintance, a close friend.  We always wonder when we hear about it what was going through the person’s mind.  Whether true or not their reality is grim.  Their reality tells them there are no better days ahead.  Life is hard.  I’ve learned a few lessons.  One of them is to be less judgmental.  No matter how similar situations may seem, one person has never walked a mile in another’s moccasins.  Be careful what you say.  Moreover be careful how you say it.   You never know what the people listening to you have been through.

October 21, 2011 has come without fanfare. No doomsday, no explosions, no mass disappearances, no 100-car pile ups, no unpiloted flights…nada.  Happy End-of-The-World Day everybody! 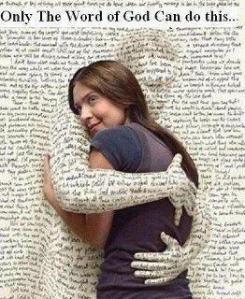 I admit that I’ve felt all warm and fuzzy after reading certain Bible passages, but I’ve never had the Word do this.  It’s kinda creepy….

Hmmm….that just gave me an idea for a Halloween costume.

Apparently it’s a win-win all around if you’re God.  If, on the other hand, you happen to be a mere mortal you might be in for a bit of a waiting game.  Wait for your prayer to be answered, or not.  If not, how do you know it’s only a delay?  If it’s not a delay, how do you know when the something better came along?  This quote is just our way of patronizing ourselves so we don’t feel like such schmucks for begging an invisible being for things we are afraid we can’t or shouldn’t have anyway.

Truth is:  we’d probably have a lot more of what we asked for if we actually pursued it.

On the heels of my 5K debut The Tour Guide flew in to visit for a couple of weeks.  He got here on September 24 and we had a fantastic time.  Because I’d just joined the ranks of the employed I couldn’t take much time off, but we did manage to sneak out of town for a few days.

I absolutely love Savannah so I took The Tour Guide on a tour of it. 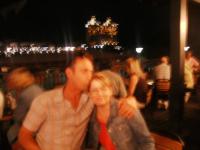 We spent the night there and had a delicious dinner on River Street.

The next morning went down I95 to check out Cumberland Island.  We took the ferry from St. Mary’s over to the Island.  While there are some residents on the Island, they’ve banded together to preserve it in it’s natural state.  No hotels, no tiki bars, no airbrush t-shirt shops. There are no stores, no restaurants nor anything commercial.  We took a picnic lunch over along with a small ice chest packed with drinks because there’s nowhere to buy anything once you’re there.  Completely unspoiled.  The only thing there is to spend money on once you’re on the island is bicycle rental at the beach camp.  We met quite a few people who were camping for the weekend.  It’s breathtakingly beautiful. 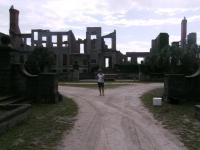 Cumberland Island is home to the very first African American Baptist Church and the original burial place of General Henry Lee, III.  Wild turkeys, turtles, and horses roam free.  The only vehicles in the State Park are the ones that the Rangers drive.

We also spent a lot of time with my family.  For my little sister’s birthday we had a cookout, 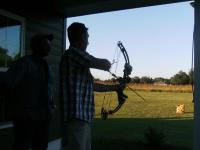