In 2012, Chuck Norris, the kick-ass king of martial arts and star of Walker, Texas Ranger, produced a video with his wife predicting “1000 years of darkness” if Obama won a second term.  In it he proclaims, ““If we look to history, our great country and freedom are under attack. We’re at a tipping point and, quite possibly, our country as we know it may be lost forever if we don’t change the course in which our country is headed.”

According to him Barry O. is now importing Muslims into the U.S. illegally, is going to grant them amnesty, and get them Nationalized before the 2016 election to make sure the democratic nominee for the presidential election wins. He states, :

As if President Obama hasn’t made enough wrong moves, now, he’s going to finish his presidency casting a wide net of amnesty and carting illegals into every American community with virtually no regard for safety in doing so. But he does have one thing in mind for certain: creating new voters in every state to ensure a 2016 win for the Democratic Party presidential nominee.

First, the Department of Homeland Security, or DHS, sent letters to all 9,000,000 green-card holders urging them to naturalize prior to the 2016 election.

So….no, President Obama does not now, nor has he ever had a “strategy to “seed your communities” with at least 70,000 refugees a year, including Iraqis, Burmese, Bhutanese, Somalis, Cubans, Syrians and others. And the numbers of Syrians, mostly Muslim, will surpass them all,” as envisioned by Norris.

According to Norris, PJ Media obtained an internal letter written by Leon Rodriquez, director and co-chair of the Task Force on New Americans, which refers to a White House report called, ‘Strengthening Communities by Welcoming All Residents’.  Norris claims this letter states, “This report outlines an immigrant integration plan that will advance our nation’s global competitiveness and ensure that the people who live in this country can fully participate in their communities.” The horror!

Then Norris adds, “Of course, “fully participate” is code for granting voting rights and specifically re-electing a Democrat president.”

What a cunning and diabolical plan!  Mwhahahaha!  I can see the President wringing his hands and using a villainous laugh as the smoke rises from beneath his feet.  And it’s genius.  Except it can’t happen.

Could it be that “fully participate” means legal employment, paying taxes, having to participate in the Affordable Care Act, and going to school?

Nah, that would make too much sense.

The reason why TheBrit didn’t get his letter, though, is an interesting one.  He came here legally.  Which means he’s in line in the order in which he applied for long term permanent residency behind all the ones in front of him.  He’s not even eligible to apply for naturalization for at least another year.  And those 9 million green card holders?  If they’re holding a green card they’re here legally.  They can only naturalize if they’re eligible to naturalize.  There are a lot of green card holders who will never be eligible for anything more than a ten-year residency.

This whole conspiracy theory has so many flaws and holes in it it’s ridiculous.

The cherry on top?  The icing on the cake?  Norris finishes his diatribe with this crescendo, “Obama has literally helped build the environment for the Apocalypse, as defined by both Muslims and Christians.”

Take heed and look to the skies, my friends, the end is nigh.

As I read this post at VictoriaNeuronotes and the subsequent comments I was brought to just such a remembrance. I remembered when I thought so little of myself that wanted nothing more than to be broken and spilled out because of what my supposed savior had done for me.  I was, in my mind, such a wicked person; so evil and vile that only a perfect blood sacrifice could atone for my shame, my depravity, my iniquity.  Unworthy of such a sacrifice I would be willing to sell my soul to the one who had made such a sacrifice.

I was reminded of this song by Steve Green which used to be a sort of personal anthem:

Broken and Spilled Out

Broken and spilled out
Just for love of You, Jesus
My most precious treasure
Lavished on thee

Lord, You were God’s precious treasure
His loved and His own perfect Son
Sent here to show me the love of the Father
Just for love it was done

Broken and spilled out
Just for love of me, Jesus
God’s most precious treasure
Lavished on me

I so identified with the very first verse of Amazing Grace:

Amazing Grace, how sweet the sound,
That saved a wretch like me….
I once was lost but now am found,
Was blind, but now, I see.

I even took to heart that John Newton had originally written, “…that saved a worm like me.”

A worm.  I was nothing more without Jesus than a wriggling worm in the dung heap of life. As a result of being told over and over that I was born as an affront to God, his enemy, I needed Jesus to mediate on my behalf. Made in God’s image, of course.  But I marred that image from the start by my own unrighteousness.  Anything good, and noble, and beautiful were the remnants of God’s perfect image.  The blackness, the ugliness, the humanness, that was all me. And that part of me deserved eternal damnation in a lake of fire. I needed a savior. And like anyone who has ever been saved from a sure fate of hell I was enamored with the savior.

This, folks, is the prescription company defining the disease and selling the cure.

I wanted to be broken and spilled out and used up in sweet abandon for any cause to which my savior called me.   And I was.  I was broken.  Every bit of my essence spilled out.  Shattered into a million little pieces.

You see, just as Victoria states in her excellent post, this all comes at a price.  Any notion of self-worth is hijacked and jack-knifed. Why would any loving parent want their child to be so broken?  How can this be called love?  In any other setting, if you removed the super-natural being from all of this, we would see it as twisted and abusive.  How can we just excuse this and say that because this is God there is some sort of caveat that makes this all different? 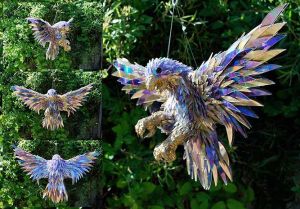 So I’ve taken my million little pieces of broken and spilled out mess and I’m putting them back together.  I’m making something new.  I am reborn.

I love the water.  Always have.  There’s something healing, something soothing, something so peaceful about it.  It makes me feel at one with nature and the universe.  That’s about as spiritual as it gets for me.

For Valentine’s Day, instead of swapping cheesy cards and overpriced flowers, TheBrit and I decided to have an experience.  We finally got to go on a kayaking trip a couple of weekends ago.

It was the perfect day for it, too.  It was breezy and sunny.  Not too hot.

As we paddled along the seven-mile course sounds of the kayaks and the oars gliding through the water ran through me and I felt so relaxed, so mellow, so at ease. It is truly medicinal.

Turtles were on nearly every log and every rock we passed by, stretching their necks and their legs as far as possible to soak up the warm sun.

Going on down the river a bit we saw a hawk soaring overhead.  I turned my kayak to try to get a shot of this magnificent creature as he lit and perched on a branch nearby. 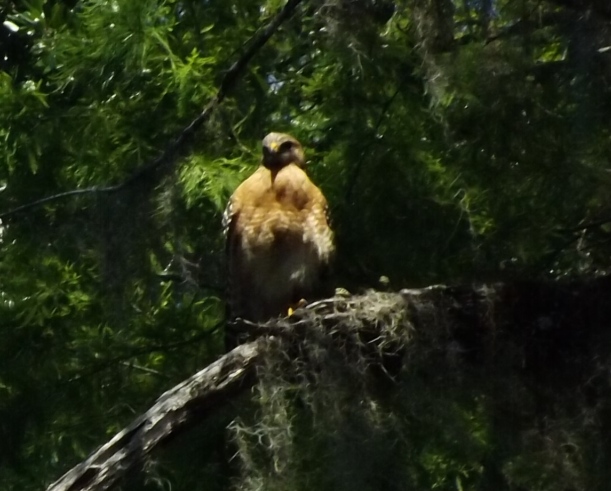 Later, as I dangled my feet over the sides to do as the turtles had done, stretching myself to soak up the warmth of the sun, this damsel fly hitched a ride on my foot. 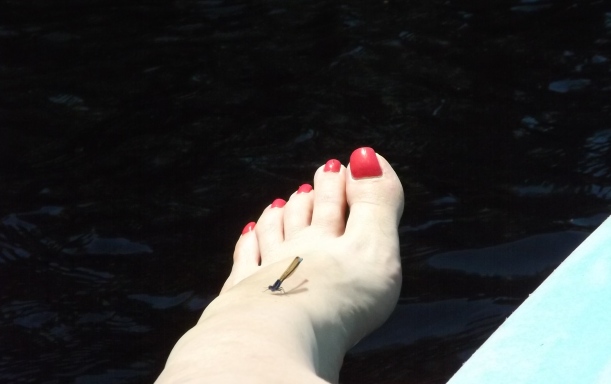 He rode for quite a ways.  Then a green-eyed dragon fly decided to join the cruise.

A damsel in distress!

The dragon fly decided it was lunch time and made a meal of the damsel. I watched with intrigue as the dragon fly started with the head and ate the whole thing.  Then he eyed me! 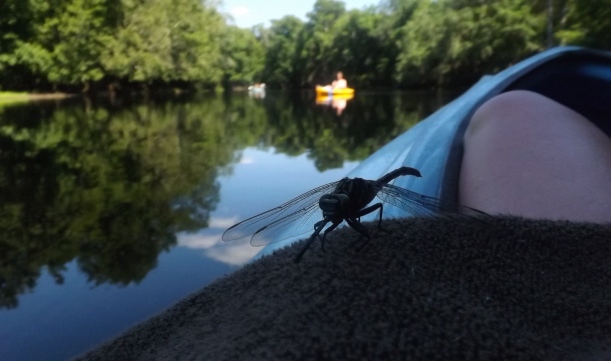 I wasn’t entirely sure the damsel wasn’t just an appetizer and he was sizing me up for the main course.  I guess he decided he couldn’t take me and eventually buzzed away.

We completed the journey by docking at a crystal clear natural spring filled with children splashing and laughing. 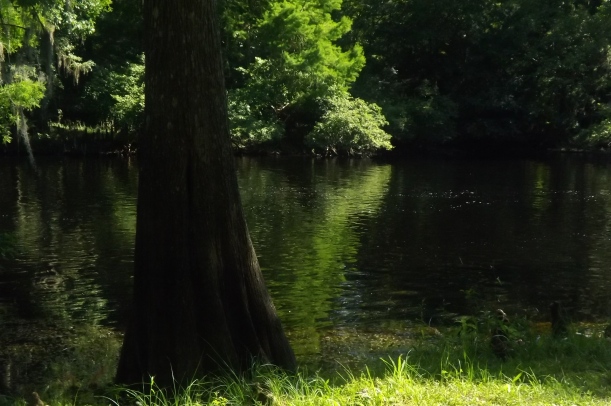 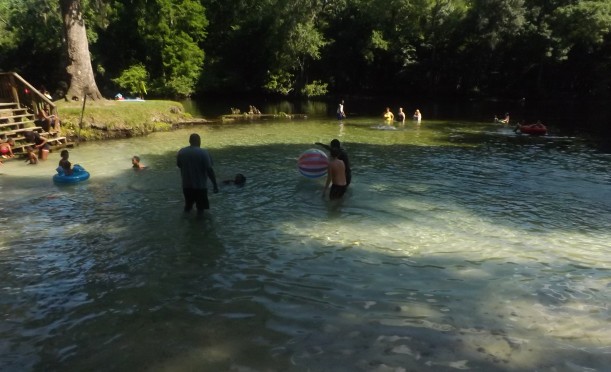 I love the water.  Always have.  Happy Valentine’s Day, MyBrit.

So I’ve been hella busy lately.  I’ve got some posts in the works but haven’t had the time to polish them off like I’d like to.  I’ve been visiting around and commenting sparsely in the blogosphere.  In my down time I’ve been trying in vain to capture a blog-worthy photo of these busy little hummers that frequent our feeder.  After about a bazillion attempts these were the best I could come up with: 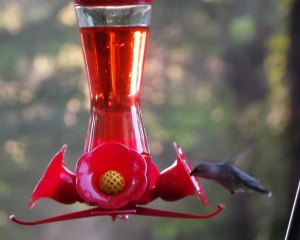 These beautiful and awesome little creatures brighten my day so I’m putting them here for you to enjoy.