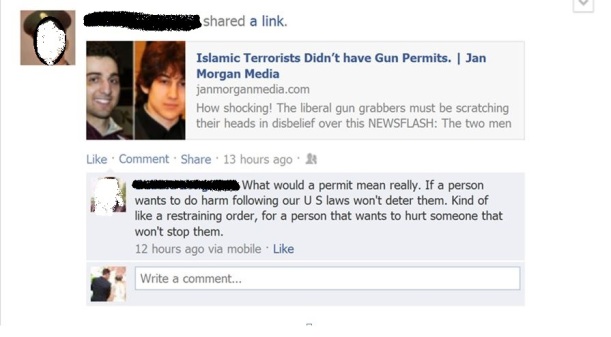 If laws do not deter criminals then we should not have laws.  People who would obey laws will do so anyway.   Sounds logical to me.

David Tyree, famous for catching a desperate Eli Manning pass in  the fourth quarter of 2008 Super Bowl XLII, has come out in an interview with NOM – National Organization for Marriage with this to say about same-sex marriage:
In the video he says the following:

“If they pass this gay marriage bill … this will be the beginning of our country sliding toward — it’s a strong word — but anarchy. The moment we have, and if you trace back to other cultures, other countries, that will be the moment where our society itself loses its grip with what’s right. … Marriage is the backbone of society, so if you redefine it, it changes the way we educate our children, it changes the perception of what is good, what is right, what is just.”

Anarchy?  Does David Tyree know what anarchy means?  From Merriam Webster I bring you the following definition:

a : absence of government
b : a state of lawlessness or political disorder due to the absence of governmental authority
c : a utopian society of individuals who enjoy complete freedom without government
2.
a : absence or denial of any authority or established order
b : absence of order : disorder <not manicured plots but a wild anarchy of nature — Israel Shenker>
3: anarchism
As the USA is fond of it’s big government I can’t imagine that he is referring to the first definition.  I’m not sure how he can be.  If same-sex marriage passes it doesn’t negate government.  The marriage of same-sex couples then becomes regulated by the government.  The second definition clearly doesn’t fit either.  It seems to me that with a push to legalize same-sex marriage comes order.  Same-sex couples want to define themselves as such.  They want to be legally recognized as such.  The forced closeting, the denial of such recognition is what is producing and perpetuating disorder for these couples.  Clearly this rules out anarchism.  Asking to be recognized as married is nowhere near a push for a society free of government.  Same-sex partners are merely asking for the same rights and benefits heterosexual partners enjoy.
So what can David Tyree mean when he says we’re slip slidin’ away toward anarchy?  Direct-democracy maybe;  the people making decisions collectively for themselves in place of a representative.  This sounds nice except that the framers of our constitution were opposed to it and made provisions for a representative democracy.  It’s interesting to see why they did such a thing:  to keep the majority from forcing it’s will on the minority.  Representatives are supposed to protect individual rights.  Most of us were under the impression that in a democracy the majority is supposed to rule.  That’s only true to an extent.
While we’re busy making laws to ‘protect’ marriage we’re imposing the will of certain individuals onto other individuals.   Marriage is the backbone of society, so if you redefine it, it changes the way we educate our children, it changes the perception of what is good, what is right, what is just.”  First of all, it’s not a redefining of marriage.  Marriage has always been between two people for political reasons, personal reasons or economic reasons.  Marriage will still be between two people for those same reasons.  Is what is good, right and just only a perception?  Maybe the perception that marriage should only be between a man and a woman is wrong.  How does it change the way we teach our children?  By making them less bigoted? By teaching them that it is alright to accept people for who they are?
As far as anarchy goes, the state of lawlessness or political disorder due to the absence of governmental authority, I don’t think that can be blamed on same-sex marriage.  If there is anarchy here in the good ole USA it’s due to greed.  Is the government really in authority here or is it the lobbyist with the most money – on any issue?
He goes on to say:

“It’s not about establishing a theocracy, it’s about what’s right. How can marriage be marriage for thousands of years and now all of a sudden because an influential minority has a push or an agenda and totally reshapes something that was not founded in our country, not founded by men, and it’s something that’s holy and sacred. I think there’s nothing more honorable than fighting for, especially if we really care about our future generations.”

It’s not about establishing a theocracy, eh?  Who determines what’s right?  Sounds like David Tyree wants his version of God to determine that.  Wouldn’t that make that a theocracy?  Certainly sounds that way to me.  His follow up statement is telling of that.  Marriage wasn’t founded by men and it’s holy and sacred.  The implication being that it was founded by God.  David Tyree, the National Organization for Marriage, Focus on the Family and a host of other conservative groups would love nothing more than to think this country’s government is being divinely guided by the Christian God; their version of Him.
I’m not certain what these groups feel so threatened by.  Same-sex marriage does not undermine traditional marriage.  Either you are gay or lesbian or you aren’t.  Being such is not contagious.  There will still be heterosexual marriage.  It seems to me that it would be a comforting thought that may just shatter the preconceptions and assumptions about homosexuality.  Conservative Christians paint this as perverse, deviant and promiscuous.  The idea that gays and lesbians want commitment, to be legally married, to have a life partner kind of blows that out of the water.  It means they want the same things straight people want. To live their lives in peace, with the partner of their choice.
You know what else shatters your assumptions about same-sex couples?  Getting to know them personally.  You find out they’re real people with real dreams and real aspirations.  You find out that deviance isn’t about sexual orientation.  Deviance might just be trying to decide for someone else what their sexual orientation should be; trying to force them to live a life of celibacy or, possibly worse, trying to force them to partner with someone they have no desire for.  Homosexuality isn’t chosen.  It’s as innate as heterosexuality.  Same-sex marriage won’t break the backbone of our society.
I went to the NOM website and read their ‘talking points’.  It all boils down to: same-sex marriage just isn’t right.  They have no substantial or even logical reasons why same-sex marriage would threaten society. National Organization for Marriage and David Tyree need to take their alarmist bigotry somewhere else.