Sometimes I have a hard time deciding whether to engage or not when someone posts idiotic nonsense like this on social media:

Make no mistake. If President Trump is impeached on false charges. We will rise en masse and you will see the likes of a civil war. Everday AMERICANS will take …to the streets we will withdraw our money from banks, close our 401k’s, pull our kids from school. We will rise against the the Democrats, RINO, NeverTrumpers, and shadow government. You will have showed us our Republic is a farce and democracy is dead. We will riot.

This quote is being shared readily on social media.  I have no idea who to attribute it to.  Several people have posted it with no citation as if it’s their own.

More often than not I choose not to engage.  There would be no point as no one in the situation would change their position, including me.

The comments that follow are big, “Hell yeah! Count me in! I’m ready!!!”

The question is:  If and when President Trump is brought for impeachment how will these people be determining whether the charges are false or legitimate?

Who didn’t already know that our Republic is a farce and that democracy is dead?  Capitialism, lobbyists, and crooked politicians have ensured that fact.

The best the I can tell from those who espouse this point of view, no amount of evidence would convince them that Donald Trump has done anything wrong.  Even his admission of such isn’t enough.

I believe he was right when he said he could shoot someone in the middle of Fifth Avenue and he wouldn’t lose his supporters.  They’re die-hards who will not budge.

These same supporters seem to be offended at the suggestion that they are uneducated, racist, or misogynist.  Yet they post ignorant, racist, objectifying memes and expect to be taken at their word that they aren’t the very things that they find agreement with.

I’m very thankful that these die-hards seem to be in the minority but they are quite loud.

I haven’t said much about our political climate here in the States because I, quite frankly, haven’t quite known what to think of all this, between the news media and the crazy train running through the White House.

The haze is lifting and I have some very distinct opinions but I don’t think the Republican nor the Democratic parties would be particularly thrilled with them.

This, my friends, is why I have not gotten involved in any social media wars about the upcoming train wreck we are calling a Presidential election in this country. 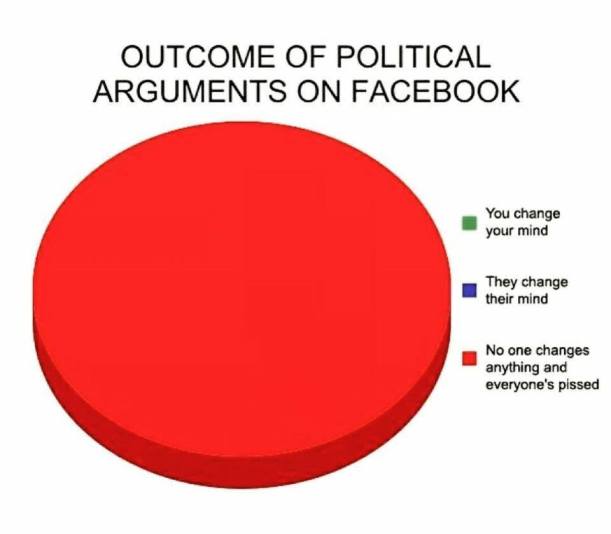 I see in my social media feed many who are one issue voters, find “The Biblical Argument for ________” candidate, and generally speaking, people who have their minds made up and have an ax to grind against political party a or b.

Frankly, I’m very discouraged.  I don’t want Hillary Clinton – not because I think she’s the devil, but for the very same reason I believe to be behind the inaction and stagnancy in Washington now.  The Republicans seem to oppose anything remotely envisioned by the Democrats.  It doesn’t seem to matter if it’s good for our country or not.  Yes, we have a two party system so that the views of all the people are represented, but surely there have to causes and issues that are bipartisan in nature.

I loathe the very idea of Donald Trump as president.  He is not good for our country.  This can be seen in the very visceral divide between his staunch supporters and anyone who disagrees.

Because of where I live most of the people I know back the Republican platform, even if they don’t like Trump himself, and will be voting that direction.

Yesterday, one of my social media acquaintances expressed that he would feel the election is rigged if Donald Trump doesn’t win because nobody he knows is voting for Hillary Clinton.  As if all the people he knows represents the entire population.

Honestly, here, people are a little afraid to say they’re voting for the Democratic nominee because of the backlash, the barrage of insults, the fearmongering, and the belittling simply because one party has a different vision for our country than the other.

When there have been back and forth…em…debates?..about who should be president it turns ugly quickly.  Nobody is listening, they’re only formulating responses, insulting each other, and there is seemingly no common ground. I’m hoping that there is a silent majority out there who isn’t towing some party line, who just wants what’s best for the country, and who doesn’t really give two damns whether an idea is Republican or Democrat, only that it’s good.

I wish our country had better to offer than the two leading candidates.  I even considered third party candidates.  It’s hard to take someone seriously if they don’t even know who the leader of North Korea is.  It’s one thing to be Libertarian and believe that the U.S. shouldn’t be intervening in international conflict as much as we do or that we shouldn’t be trying to topple leaders and overturn regimes, but it’s inexcusable not to know anything about what’s going on in the world.  Even if your foreign policy is one of minding our own business we’ve got to know how the hell to make that happen since we’re already involved.

I’m looking down ballot.  The president can only do so much through executive order, so regardless which candidate is elected, unless we can get past the bipartisan bickering and actually come to some kind of compromise we’ll go another, at lease four, and more likely eight years of this same divisive rhetoric we’ve had over the last several years.

It’s disheartening to say the least. Maybe Victoria was right.  Maybe we are going down the crapper.  Too bad shit floats. When the nuclear fallout settles we’ll have nothing left but cockroaches.

Now Mike Pence knows what it feels like to be groped by an entitled old white guy.  Just like a woman, he closed his eyes, hoped for the moment to soon pass, and thought, “someone, please, just tell me when it’s over.”

I wonder if this is what it looked like when Judas kissed Jesus.  Just.so.uncomfortable.

This article sums up exactly what many of us have been saying about Donald Trump for a long time. This former Trump campaign strategist speaks out at great risk. Volunteers of the Trump campaign were compelled to sign a contract stating that they would not say anything negative about the candidate now or in the future. Or ever.

What I’ve seen the longer I’ve helped prop him up along with the millions who are helping Trump is that we got the slogan wrong. A more accurate internal slogan would read, “Let Trump Help Trump.”

I don’t dismiss any single Trump constituent, which is why I believe it’s important to let you know that the candidate does.*

I, too, think our country has gone off track in its values. I, too, think that we need a dramatic change of course. But I am, in my heart, a policy wonk and a believer in coming to the table with necessary knowledge for leading the free world.

The man does not know policy, nor does he have the humility to admit what he does not know — the most frightening position of all.

I’m not a Twit but a friend who is forwarded this to me.  If you’re having trouble figuring out who to vote for refer to this handy dandy flow chart!