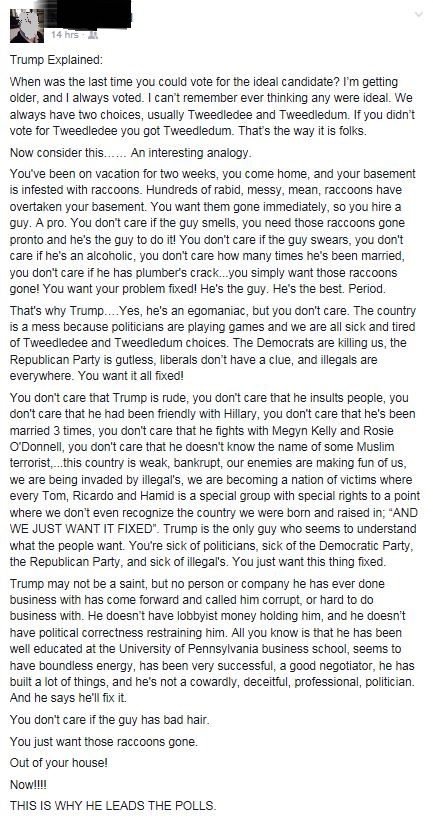 He’s as racist, bigoted, and misogynistic as people feel.  We need an exterminator to take care of the problem.

Trouble is, nobody’s asking, and even if they are they don’t care about the answer, how he’s going to do this.

So you’ve hired an exterminator, you’ve given him carte blanche to deal with the problem.  You leave it to him.  He says, “Believe me, I’m the best.  No raccoon has ever gotten the better of me.  Raccoons are losers and I’m a winner.”

You trot off to work, leaving him to fix your problem, without even asking for a plan of action.  You carry on, blissfully, throughout your day knowing when you get home those damned raccoons will be gone.  Oh, happy day.

The exterminator calls you, just after lunch to tell you that the problem has been resolved.  He’s taken care of it and those pesky raccoons won’t bother you any more.  He’s left a bill in your mailbox.

On your drive home you’re singing along with the radio – rocking out, actually – excited to get home to your peaceful, beautiful, raccoon-free home.

You turn down your street and there are people standing out in front of what used to be your house. The only thing left standing is the mailbox.  It’s been raised.  Flattened to the ground.  He used explosives and blew it to smithereens.

Sure enough, just as he said, there’s a bill in the mailbox.  It’s more than you can afford.  And he blew your damned house up!  You’re not paying that bill.

Except you ring him up to tell him so and he says that, yes, you will pay the bill.  He did what was requested.  You said you wanted those raccoons gone, and you wanted them gone pronto.  He did that.  You never asked how that would be accomplished.  You didn’t discuss the terms of any agreement.  Only that you agreed to pay him to get rid of the raccoons which he did.

And if you don’t pay the bill he’ll see you in court!

May the gods help us all.  Ain’t America great?

I see you there, struggling with your children, wondering what might be next.

You weren’t Muslim enough for the extremists in your country.  Or you refused to become Muslim and instead were threatened with your very life and the lives of your children.

You’ve probably already lost your husband.  And if you haven’t you are afraid for his life, too.

You’ve been bombed by those fighting the extremists in your country.  Your home and your homeland is in shambles.

I see the worry in your face.  Every line earned.

You’ve seen and experienced violence the likes of which my privileged, white, self has never even had nightmares to rival.

You had no choice but flee.  Flee the problem. Flee the arrogant supposed solution to it.

Run to where?  Nowhere.  No job, no home, no money.  Run away from terror into horror.

I’m sorry for your luck, really.  Through no fault of your own you look like them.  Whoever them is.  You have the wrong color skin.  You wear the wrong garments.  We can’t help you.

To hell with you.  We’re closing the door in your face.

I see you, but you are on your own.  I will turn my head pretend that my country and others have no blood on their hands.  I will pretend that we had no hand in empowering those who seek to do you harm. Your plight is not my problem.

I see you there, with your trouble on every side.  You might just bring your trouble to me.  I will close my eyes and hope it turns out alright for you.

I’m praying for you, nonetheless. I hope you find Jesus before it’s too late.

The United States of America

I am sad to see our country closing it’s borders to those in need. I have no idea how to help in any tangible and meaningful way.

If you want to help, even in a small way, please consider giving to one of these organizations:

I’ve turned into the crazy dog lady.  Really, I have. But I have my reasons.  Think what you will of me.

About three months ago I decided to switch my girls from kibble to some kind of homemade diet.  It seemed like a good idea that the time.  Still does.

My main reason for even looking into a homemade diet was that Miss Sara, or Bitzer as she has been dubbed by me, would walk up to the bowl, sniff the kibble, look longingly at it like she wanted to eat it, and then walk away.  She learned to eat what she wanted of it quickly or Dottie would take care of it.  She would reluctantly eat about half of it and leave the rest for Dottie.

At first I figured she was eating until she was full and just leaving it because she was done.  But frequently, at least a couple of times a week she would regurgitate part or all of what she’d eaten.  I switched brands of kibble several times and then I went to Google.

While researching I learned that all Bitzer’s(I never even call her by her real name unless she’s in trouble anymore) licking and “fleaing” and puking might be because she’s allergic to grains.  I’ve since learned that she is.

Now, raw feeders swear by a raw diet.  And, for the most part I do, too.  It is closer to how dogs in the wild eat.  They are carnivorous.  Or omnivorous.  I’m not sure which because there are so.many. different ideas about what they are.

I looked into the Bones and Appropriate Raw Food model.  I looked into the Prey Model Raw diet.  I researched as much as I think I can about what is appropriate for my dogs to eat.  I’ve settled on what works for me and, more importantly, my dogs. It’s a homemade diet consisting of boiled eggs(the whole thing including shell), some vegetables(cook and mashed or raw and pureed), meat of varying kinds(pork, beef, chicken, goat, etc.), and bones.  I’m not going into a great deal of detail here about the percentages of each because this isn’t an advice post about how to feed your dog. This just works for me and my dogs.

You might be scratching your head by now wondering what this has to do with extremism. Stay with me, here.

I joined a raw feeding facebook group and a Yahoo! group.  This is a group designed to teach the ins and outs of raw feeding because you can’t just toss your dog a chicken leg every meal.  It seemed like a good idea at the time.

They are also extreme.

You see, at first I had settled on the Prey Model raw diet, which is only muscle meat, bones, and organs. So joining a group that helps people with that seemed only logical.

What I quickly learned is that anyone(I wasn’t the offending party) that asked any questions about feeding anything other than muscle meat, bones, and organs received a written flogging.  If they asked another question or mentioned that they fed their dogs any other “unapproved” food they were banned from the group.  No, you may NOT use ground meat. You may NOT cut your dog’s meat up. It has to be a hunk of meat bigger than your dog’s head.

They are SERIOUS.   Now, I know that groups have to have rules.  I know that they need some structure, but whew!  And so I unceremoniously un-joined the group because they do have it as part of their mission statement that discussion of anything other than their approved feeding recommendations WILL NOT BE TOLERATED.  The will freak out on your ass. Never on mine, mind you.  Because I saw how they treated the ‘others’.

I probably wouldn’t have joined the group had I read that before joining, but alas, hind-sight is 20/20.  And Bitzer just looks at those big hunks of meat and then looks at me like, “Seriously? You’re kidding, right?” So I cut hers up.  Sue me. Dottie?  She’ll eat anything! I even resorted to giving them *gasp* vegetables.

It just goes to show how any group can become extreme about just about anything.  And I’m pretty averse to extremism in just about any form.

As you might have guessed, since I’m the crazy dog lady, this entire post has been a pretext for working in some photos of Dottie and Bitzer. 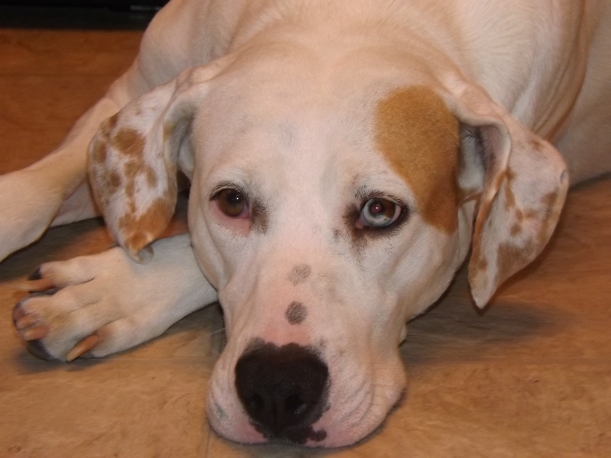 I don’t watch a lot of news.  Just enough, usually, to catch up on the day’s events.  But much like during the aftermath of the 9/11 attacks on America I have found it compelling to watch the news following the attack on Charlie Hebdo.  I grieve with the French, the Jewish, and Muslims who have suffered great losses.  I grieve the lives of those snuffed out by an ideology which tolerates no other.

If you’ve read much here you know that I am not a believer.  I don’t believe in any kind of deity.  However, I will defend the right of others to practice the faith of their choosing. Up to a point.  When that practice crosses over to extremism, violence, and abuse I feel we all, every one of us, has a duty to oppose it.

Having watched much of what is transpiring in France – the prevailing attitudes and multitudes flooding the streets I am inspired as I was after 9/11 that the future is brighter in spite of those who would have it another way.

“Go on doing with your pen what in other times was done with the sword.” – Thomas Jefferson

“The tongue is mightier than the blade.” – Euripides

“The pen is mightier than the sword.” – Edward Bulwer-Lytton

No, I am not a believer, but je suis juif, je suis France, je suis Charlie Hebdo, je suis muslim.  Today I am human. Today I am a humanist.