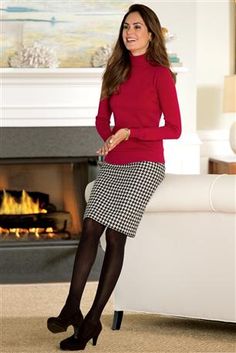 One day this week I wore an ensemble not unlike the one pictured above.  Very similar, in fact.  Classic.  Business-like.  Appropriate office attire. Not especially provocative.

I was told by Mr. Keep-Away, “That outfit looks good on you.”  Then he proceeded to say, “It…well…I better not say what I was thinking.”

But then he just wouldn’t let it go.

Last week I could hear him the next office over, playing keep-away with my co-worker, asking her if she was going to kiss him for “doing her a favor”(not really, he was just doing his damn job).  I cringed.

He has already remarked about the clothes I wear, “hitting all the right places.”

Then he looks at Mr. GM and says, “Is that sexual harassment?”

I think, “Probably not until you made it about sexual harassment.”  Meanwhile I’m also wondering what it means that he’s “old-school.”  Does he mean old-school as in when sexual harassment was perfectly acceptable and even expected in an office situation?

Mr. GM says, “That all depends on whether she’s offended by it or not.”

Why in my mind is there a vast difference between, “You look good,” and “You look nice?”

There’s just something in the connotation.  Are you sitting down to a porterhouse steak?

I laugh it off, “It all depends on whether you’re looking at me like you’re about to eat a pork chop or not.”

Mr. Keep-Away always looks like he’s about to eat a pork chop without his hands.

Even the Controller has made remarks both positive and negative about the attractiveness or lack thereof of the women who work here.

I was just making conversation one day and remarked that I’d like to meet a woman who works in a satellite office.  She’s a hoot, but I’ve only spoken with her on the phone.  I’ve never met her face to face.  His remark:  “You haven’t missed much.  She looks like Receptionist, only bigger, if you can imagine it.”

Controller:  “I’m just telling you what she looks like.”

Me:  “What does that have to do with me wanting to meet her?”

In a separate conversation about exercise, he commented that he goes to the gym.  I just said that I’d never exercise if I had to go somewhere to do it.  I run because I can just lace-up and go.  He made some offhand remark about me not needing to lose weight(is that the purpose of exercise?), but that he couldn’t really comment on it because he could get into trouble.

Why did it even need to go there?

The thing is, women are expected to just laugh it off.  We’re in a catch 22.  Yes, there are laws against sexual harassment, but if you file a complaint then you’re a problem.  A troublemaker.  A whiner. Suddenly your performance is scrutinized and the next thing you know you’re looking for another job.  Yet, if you don’t file a complaint you’re seen as complicit.  How can it be sexual harassment if you don’t complain?

Do you know what I have never.ever. heard?  Any of the women in this office say anything like any of this to or about the men who work here.

Is sexism systemic?  Noooo…can’t be.  There are laws against it.