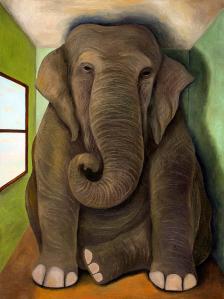 The Elephant in the Room

I feel like I’m normally a voice of reason, level-headed and on an even keel.  Most of the time, these days anyway, I don’t get triggered. So when I was totally out of the blue it sent me into a spiral of sorts. I haven’t experienced that in quite some time.

Being triggered, for me, sets into motion a whole chain of negative self-talk and along with it self-doubt. In a sort of PTSD-like fashion it sends me right back to that place where I was before I escaped the situation that led to the PTSD to begin with.

Usually, not always, when it’s words that trigger, there’s what’s actually said, and what I understand the words to mean.

Someone might say, “How could such an intelligent person believe (insert whatever nonsense you like)?”  I hear, “Damn, you sure are stupid.”

When I hear, “Damn, you sure are stupid,”  I start to reevaluate every negative thing that’s happened in my life and come to the astounding realization that, “Damn, I sure am stupid.  And if I weren’t so stupid most of that wouldn’t have even happened.”

Belief in talking snakes and global floods?  Stupidity on my part.

Sexually assaulted?  Stupidity on my part.

Involved in an abusive relationship?  Utter stupidity on my part.

No one has to say it.   I already know it.  When someone even implies it, it only confirms what I believe about myself even when it flies in the face of logic and reason.  Belief doesn’t have to be reasonable.

The reality is(nothing like a dose of reality to kick you in the head), it doesn’t really even matter the words that are said.  Another person’s opinion of me or my situation doesn’t make it reality and it doesn’t change who I really am.  No, the triggering part is the words I say to myself.  What the fuck difference does someone else’s opinion of me make? It doesn’t make me less of a person.  It is my beliefs about myself that make me feel less off a person.

Therein lies the rub:  I know that logically.  It’s my feelz that get me into trouble.  Emotions –  fear, anger, sadness, joy, and yes, even love are the bane to the existence of logic and reason.  Yet none of us ever are always logical or reasonable.  I am not Dr. Spock of Star Trek fame.  I am fully human.  And as much as I value reason and intellect I have to admit I’m not always reasonable.  And I can surely do some stupid things.

We all can.  If that were not so there wouldn’t be so many normally intelligent people who are divorced twelve times, or who lose their fortunes betting on a long-shot, or who fall for some of the most far-fetched scams imaginable. It happens.  And you wonder how such smart people can do such stupid things.

I have a big pile of baggage. No, it’s not a matching set.  I forget about it until it falls out of the closet like an avalanche on my head.

All of us come each day and to each post with our own sets of baggage; with whatever is bothering us that day, or whatever is happening at home that day, or whatever exciting things are happening for us that day.  We each come to every post, no matter how hard we try not to, with our preconceived notions of how the world works; the oughts and ideals which we value and hold dear – not necessarily reality or how things really are.

Life is hard and it’s messy.  Each of has in our own minds our various issues and insecurities.  We have our own niggles, things that eat at us and erode our sense of self-worth and security.  We all have our own perspectives even if they’re flawed.  We can only see from our own lenses no matter how hard we try to put on the goggles of another.  We can’t ever truly know what another has experienced or the stuff they’ve been through.  It would serve us all well, especially me, to remember that.

My Life Without God

An atheist's thoughts on life, religion, politics and everything else

The Burning Times of Vesper Woolf
my story
~Burning Woman~

Elli's Blog
Why Evolution Is True
The Irreverent Kitchen

in our own image
THE EDITOR'S JOURNAL
beyond religiosity

Holding the Planet to Reason, not Ransom